In 2002 the races almost ended until a committee, composed of members of participating clubs, was formed and they planned and ran the races. The races were strictly noncommercial and no entry was permitted outside funding or advertising to be used or placed on any boat.

From that humble beginning, the races continued through 2004 with participation limited to boating clubs in the area. As the spectator interest grew and the boating clubs interest waned, more organizations were asking if they could participate in this fun event. In each of the past three years, the races drew over 2000 spectators to the Yacht Club Beach to view the event.

In 2004, at the urging of Bill Shallbetter, the head of the Cardboard Boat Race Committee at that time, the committee voted to turn the event over to a local service organization so they could expand the event and open it up to more participants. This in turn could raise some money for the service organization.

Bill Shallbetter, who is a member of the Rotary Club of Cape Coral, proposed that the club take over the event as one of the club’s projects.  The club accepted the challenge and in doing so, made some changes. The first change was to rename the event to the Cape Coral Cardboard Boat Regatta. So in 2005, the Regatta was moved to Seahawk Park in Cape Coral and the date was changed from July to May. The move from the Yacht Club Beach was necessary so the club could make some money by selling food and beverages. This also allowed the Regatta to expand and made it easier for spectators to find ample parking without the need for a shuttle from a remote location.

In 2009 the Rotary Club decided to move the Regatta to a more central location at Four Freedoms Park in downtown Cape Coral, and moved to April, to try to avoid the beginning of the Summer rainy season. At that time, Bob Gaglio took over as Chairman of the Regatta Committee and made additional changes. A Friday night event was added where people could preview the boats, listen to live entertainment and have dinner. This move was such a success we have continued to hold at Four Freedoms Park.

Bob Gaglio moved to Sarasota after the 2010 Regatta at which time Jim Perry took over as chairman of the committee.  Jim continues to do an excellent job as chairman as the Regatta grows in boat  builder participation and audience each year. In 2011 we tried to enhance the event by adding "The Dock Dogs" as a special attraction.  However, we decided to not continue using them after the first year.

2012 was one of the few years where the weather was not on our side.  We had rain showers threaten us all day, which did keep many people away from the event. But the people who did chose to brave the weather were treated to a very fun event as boat builders raced their boats in heated competitions to claim first place in one of the many racing heats we ran during the day.

The Cardboard Boat Regatta is open to participation from businesses, schools, youth groups, groups of friends, and non-profit organizations desiring to build a boat and participate. This is a wonderful team-building experience; giving employees an opportunity to work together toward a common goal and have a fun doing it.

This year the Regatta will be at:

The Cape Coral Cardboard Boat Regatta is proudly presented by: The Rotary Club of Cape Coral. 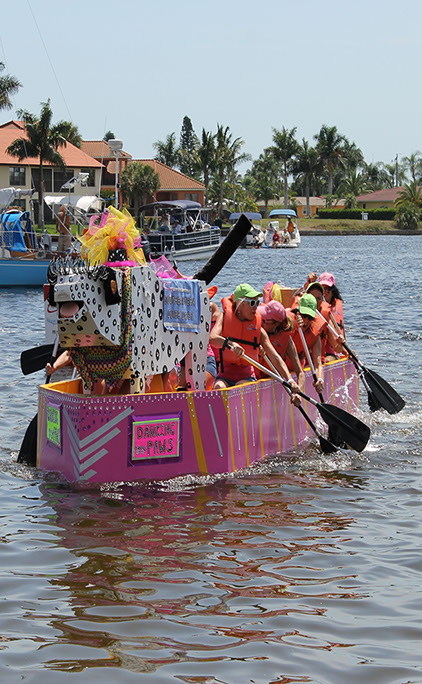